Bringing Down the Curtain on a Symbol of Blight (NEW YORK) 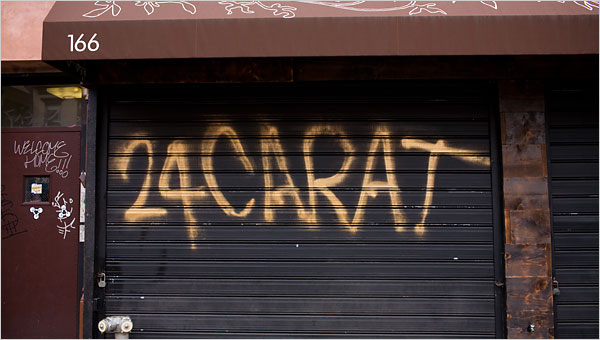 Gates like this one at a restaurant on First Avenue in Manhattan must eventually be replaced.

New York City’s storefront gates, like its fire escapes and stoops, are there but not quite there: the unnoticed wallpaper of New York at night. They have been battered by vandals and defaced by graffiti taggers. They have secured diamonds, handmade tortellini and other valuable commodities. They have provided the clattering soundtrack of dawn and dusk, the steel canvas of struggling artists, the most compelling evidence that the city does, indeed, sleep.

Skip to next paragraph

Solid roll-down gates like this one on First Avenue become canvases for the spray-paint crowd.

Some gates are decorated with merchants' logos, or, like this one, bear relevant messages.

Open-weave gates, like this one, which let passers-by peer in, will still be allowed.

And now, on orders of the City Council, roll-down gates have joined the ranks of fatty foods and cigarette smoke: they have been legislated against, some right into extinction.

The Council voted on Monday to ban the kind of security gates that completely shield commercial storefront windows and doors from view — ones that resemble old-fashioned auto garage doors, with narrow horizontal slats that rise up like a steely sort of curtain — while permitting the kinds of gates common in suburban shopping malls that allow passers-by to see inside.

Along Court Street in the Carroll Gardens section of Brooklyn, a gentrifying commercial and residential strip in what remains an Italian stronghold, the gradual ban on solid gates — there are probably tens of thousands of them — was as well-received as a property tax hike. Not a single owner or manager who was interviewed was aware of the Council’s vote.

“If the government pays, then O.K.,” said Mr. Lee, the owner of the shop, who was not surprised to learn that the government would not, after all, be covering the cost of a new gate. “They make law, law, law, and people’s life is more difficult.”

Frank Caputo took a more nuanced approach. He is the owner of Caputo’s Fine Foods, a narrow little hub of homemade mozzarella and pastas, down the street from the church where Al Capone was married long ago. Since Caputo’s was opened by his parents in 1973, the shop has had two gates, both of them the solid, no-peeking-in type. “I was afraid that someone was going to break the glass,” said Mr. Caputo, 47.

He has had the second gate — a $4,000 model with an electric motor that allows him to turn a key or press a button to raise or lower it — for about two years, and he figured that by 2026, when the ban fully kicks in, he would need to replace it, anyway. “If they would have told me I had six months to replace it, I would have been upset,” Mr. Caputo said.

Council members said the bill, which passed 45 to 0, was intended to deter vandals from spraying graffiti on flat-surface gates, to help beautify neighborhoods and to give police officers and firefighters the ability to look inside in an emergency. The ban applies to numerous businesses, including banks, barber shops, beauty salons, health clinics, dry cleaners, dental offices and retail stores.

All businesses affected have until July 1, 2026, to install security gates that allow at least 70 percent of the area they cover to be visible. Any gates installed after July 1, 2011, must comply with the new requirements.

“We took great pains in this bill to make sure we balanced quality-of-life issues and graffiti eradication with the real-life financial challenges small businesses are facing in this recession,” said the Council speaker, Christine C. Quinn. “That’s why the bill has a lengthy time frame.”

The city’s many storefronts, like their proprietors, have their own bedtime rituals. In the diamond district in Manhattan, many shops do not bother with roll-down gates: employees can be seen removing the jewelry, item by item, from the window displays, bound for parts unknown.

On one block of Court Street, the window of a barber shop with no gate afforded a full view inside (the old-fashioned cash register’s empty drawer left open and the bill holders up), but the insurance office next door seemed to contain more secrets, with a solid gate, marred by graffiti.

The metal gate covering G. Esposito & Sons’ pork store offered a peek inside, but what was visible just inside the door would probably attract only the most desperate sort of burglar: a giant apron-clad, wide-eyed piggy statue.

Karen Van Every, the owner of Serimony, a card and gift shop, has a see-through gate, which she wanted so that passers-by could look inside when the store is closed. “People walk by and they see a piece of jewelry in the window and they want to come back,” she said.

Still, Ms. Van Every, like many other Court Street merchants, said she opposed the ban because of its eventual impact on businesses’ bottom line. “Every little cost associated with having a small business could put you under,” she said.

The solid gates have a forbidding quality, recalling the bad old days of 1970s-era New York, when a desire to encourage window-shopping was superseded by a concern over rampant crime and occasional looting.

In some cases, they were no deterrent. In 1973, for example, five young burglars in the Bronx broke into a clothing store with a roll-down gate by cutting a hole in the roof.

But in other cases, solid gates might have helped. During the blackout that struck the city in the summer of 1977, looters ripped off nonsolid storefront gates by hooking chains to them, attaching the chains to cars and then stepping on the gas.

But sometimes no gate could have withstood looters’ fury during the blackout. Jonathan Mahler, in his book “Ladies and Gentlemen, The Bronx Is Burning: 1977, Baseball, Politics, and the Battle for the Soul of a City,” described the scene in Bushwick: “They were taking crowbars to steel shutters, prying them open like tennis-ball-can tops or simply jimmying them up with hydraulic jacks and then wedging garbage cans underneath to keep them open.”

The gates, like all endangered species, have their own unique history. They have kept people in as much as out: In 2004, advocates for immigrants complained that janitors were getting trapped inside locked and gated groceries until managers arrived the next morning.

In Bushwick years ago, some graffiti-tagged gates were painted over, without charge, by New Yorkers with little choice in the matter: petty criminals sentenced to perform community service.

On Court Street, many of the solid gates are marked with graffiti, but others have been used as billboards to advertise the stores they protect. Acorn Real Estate features an image of a giant acorn; R.P.T. Physical Therapy, nearby, had an artist paint its blue logo on its gate, a silhouette of a man over the phrase, “Let Us Help You Reach Your Goals.”