According to some estimates Mount Everest is littered with 50 tonnes of garbage and more than 200 corpses. The Economist explains the mess on
Everest and how to clean it up http://econ.st/1ivzaqe


On May 29, 1953, Mount Everest was conquered as Edmund Hillary of New Zealand and sherpa Tenzing Norgay of Nepal became the first climbers to reach the summit. 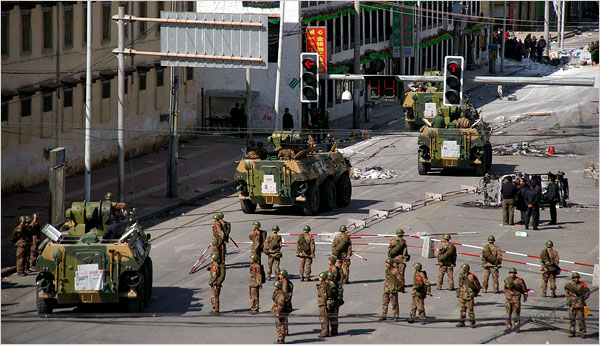 Agence France-Presse — Getty Images
The Chinese military tightened security in Lhasa, the Tibetan capital, on Saturday after days of clashes. Tibetans in the suburbs said officers were blocking people from entering the city center. More Photos >

BEIJING — Thousands of Buddhist monks and other Tibetans clashed with the riot police in a second Chinese city on Saturday, while the authorities said they had regained control of the Tibetan capital, Lhasa, a day after a rampaging mob ransacked shops and set fire to cars and storefronts in a deadly riot.


Protests in Tibet and Nepal

Reuters
Residents in Lhasa, the Tibetan capital, walked through Barkhor, an ancient part of the city where protesters had set fire to a shop and several vehicles on Friday. More Photos »
Enlarge This Image