A Weekend in Bruges: Beyond Cobbled Lanes and Medieval Canals 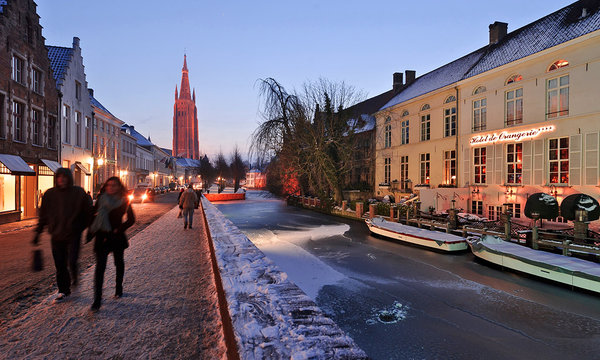 THE portrayal of Bruges in the 2008 dark comedy “In Bruges” was of a fairy tale city so dull it nearly drove Colin Farrell’s character mad. “Maybe that’s what hell is: the entire rest of eternity spent in Bruges,” he concludes in the closing scene of the film (the sanitized version, that is). In reality, the charming capital of West Flanders in northwestern Belgium is indeed tranquil, with swans gliding along medieval canals and cobblestone lanes dotted with lace shops and quiet cafes. But Bruges now has much more to offer. Ambitious restaurants are run by talented young chefs, and creative chocolate shops stock the confections of experimental chocolatiers. New and renovated museums are opening their doors and, after dark, local beer pubs offer mind-boggling selections of rare Belgian beers from the region’s celebrated breweries. Hell? Hardly. 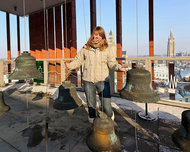 On the roof of the Sound Factory, a new interactive museum at the Concertgebouw building. More Photos » 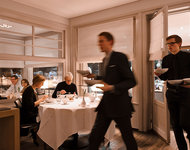 Much of the enchanting city center is truly reminiscent of a fairy tale, with stone footbridges spanning picturesque canals and cobblestone streets curving past turreted manor houses. To see the prettiest parts of this medieval wonderland, wander along the Dijver canal, which snakes through town, making sure to end your stroll at Markt, the main square dominated by a 13th-century belfry. The energetic can spiral up the bell tower’s 366 steps for a view over the city, but first exercise the panoramic capability on your camera at ground level: the neo-Gothic courthouse, the belfry itself and the quaint gabled buildings ringing the square.

With the absurdly high concentration of chocolate shops in town, it may seem as if every other storefront is peddling piles of pralines and trays of truffles. When succumbing to this temptation, seek out Bruges’s most innovative spots like Dominique Persoone’s shop, the Chocolate Line (Simon Stevinplein 19; 32-50-34-10-90; thechocolateline.be), packed with creative confections and fanciful flavor combinations like bitter ganache with vodka, passion fruit and lime. At the newcomer BbyB (Sint-Amandsstraat 39; 32-50-70-57-60; bbyb.be), however, the emphasis is on taste without tricks. Opened in October 2010, the sleek, all-white store is stocked with simple bars of fine Belgian chocolate wrapped in Pantone-style numbered boxes; try No. 15 with milk chocolate, hazelnut and babelutte (a regional caramel-like candy) or No. 50 with dark chocolate, tonka beans and lemon.

The latest buzz in the world of Belgian gastronomy surrounds neither chocolate nor beer, but rather the elegant little restaurant Hertog Jan (Torhoutsesteenweg 479; 32-50-67-34-46; hertog-jan.com). In November, it was awarded a third Michelin star, becoming only the third restaurant in the country to earn this honor. If you can snag a table in the minimalist dining room, expect a parade of beautiful, pared-down plates from the chef Gert De Mangeleer, ranging from sea scallops with veal marrow, thin slices of Jerusalem artichoke and tiny dollops of herring eggs, to luscious Limousin lamb served candied with turnips and lemon myrtle. The five-course set menu is 115 euros, or $150 at $1.30 to the euro, excluding drinks.

Start the day as the locals do, at the street market on ‘t Zand square. Skip the bric-a-brac vendors and head to the northern end of the square to shop for Belgian cheeses, smoked herring and freshly baked loaves of raisin-and-nut bread. Then buy a bag of fresh mini-boterwafels, sweet butter waffles (3.50 euros), from the stand on nearby Hauwerstraat, and munch on them on the way to the Beursplein produce market.

This early in the morning, crowds have yet to pack the museums, so take your time admiring paintings by the Flemish Primitives, a group of influential artists who flourished in the city in the 15th century. Start at the Memling in Sint-Jan Hospitaal Museum (Mariastraat 38; 32-50-44-87-71; museabrugge.be), where six captivating works by Hans Memling adorn a small chapel. Then cross the canal to the Groeninge Museum (Dijver 12; 32-50-44-87-51; museabrugge.be), which reopened in 2011 after major renovations. Studying the stunning realism of Jan van Eyck’s “Madonna With Canon Joris van der Paele” in person is worth the price of admission (8 euros) alone.

Avoid restaurants in the historic old town where prices and quality reflect a reliance on tourists rather than repeat customers. Instead, head to Tête Pressée (Koningin Astridlaan 100; 32-470-21-26-27; tetepressee.be), a stylish lunch-only spot (with an adjacent deli selling takeout) that opened in July 2009 in the residential neighborhood of Sint-Michiels. One hint that this place is intended for locals: the menu is only in Dutch. Take a seat at the long counter framing the open kitchen anyway, because the friendly chef Pieter Lonneville will happily translate. But really, you can’t go wrong with anything on the three-course prix fixe menu (33 euros). A recent lunch featured deconstructed pheasant stew with endive and grilled squash, and a wedge of pear clafoutis served warm with fresh figs.

Style mavens who can’t make it to Antwerp, the capital of Belgium’s avant-garde fashion scene, will be thrilled to discover the boutique L’Héroïne (Noordzandstraat 32; 32-50-33-56-57; lheroine.be). This unassuming shop stocks an outstanding collection of the country’s most progressive designers, from established labels like Dries Van Noten and Ann Demeulemeester to young talents like Christian Wijnants. Racks are packed with beautifully draped silk print dresses, asymmetric jackets, voluminous wool capes and thick, knitted scarves: understated, cool pieces without a logo in sight.

After a filling lunch, dinnertime will very likely roll around before your stomach starts to rumble. (Chocolate nibbling might also be a culprit.) But that makes this a fitting time to indulge in another regional specialty: Belgian fries. Here, the twice-fried, thick-cut fries are practically unrecognizable from America’s favorite fast-food side, especially when topped with a generous dollop of mayonnaise or curry sauce. One of the newest fry shops in town, Chez Vincent (Sint-Salvatorskerkhof 1; 32-50-68-43-95; chezvincent.eu), delivers piping-hot fries with a fresh side salad (3.50 euros for a large order) and views of the neighboring Sint-Salvator Cathedral through the bay windows in the upstairs dining room. And yes, it also has ketchup.

There’s no shortage of beer pubs in town, but there’s also no reason your first and last stop for a beer should be anywhere but ’t Brugs Beertje (Kemelstraat 5; 32-50-33-96-16; brugsbeertje.be). This venerated spot is undeniably gezellig, a Dutch word that perfectly encapsulates the cozy, homey feeling of the pub. Novices who can’t tell a dubbel from a Duvel can rely on the knowledgeable staff to help select a brew from the hundreds of choices on the beer menu. Connoisseurs will delight in sifting through the fantastic options, which include St. Bernardus Tripel, La Rulles Estivale and Orval Trappist ale (most beers, 3 to 3.50 euros).

Let your inner carillonneur ring at the Sound Factory (’t Zand 34; 32-70-22-33-02; sound-factory.be), a new interactive museum inside the contemporary Concertgebouw (Concert Hall) building (admission 6 euros). Compose a symphony on the rooftop — inspired, perhaps, by the lovely views across town — with a touch-screen exhibit that puts control of (recorded) chimes from the city’s various church bells at your fingertips. Then descend the staircase through an eerie auditory installation to the fifth floor, where the highlight is the colorful artwork-cum-synthesizer titled “OMNI.”

Noon
11. RIDE WITH THE WIND

When the streets start to swell with tourists, the best way to escape is on two wheels. Rent a bicycle at the train station (8 euros for four hours) and pedal northeast along the wide canal that circles the city. A gentle, 30-minute ride meanders down a leafy bike path, through green parks, over a wooden footbridge, and past the city’s four remaining windmills. On the return trip, take a short detour to Begijnhof, a quiet courtyard ringed with whitewashed cottages that were once home to Bruges’s beguines — a religious order of single and widowed women that dates back to the 13th century. Today, Benedictine nuns live here, and a respectful order of silence is in place along the shady path, ensuring that these well-trodden cobblestones are among the most peaceful in Bruges.

Check In, Check Out 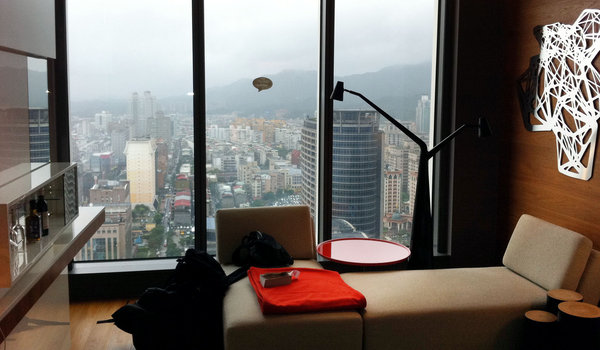 Room with a view at the year-old W Taipei.

This fashionable perch from which to explore Taipei has enough amenities that you may wish to stay in. Doubles from $300; suites up to $13,000.

Taiwan’s economy boomed in the 1980s, but the recent, rapid rise of China, its neighbor and historic enemy, has been a windfall for this island and its capital, Taipei. Wealthy mainlanders are now arriving in droves, and they need somewhere to drop off their shopping bags. With that in mind, the 405-room W Taipei opened last year in a gleaming stainless-steel tower adorned in scarlet neon lights.

In Taipei’s bustling central business district, right in the middle of the action, a few blocks from the Sun Yat-sen Memorial Hall and Taipei 101, the world’s second-tallest building. Nearby subway stations mean you can be whisked to the city’s shopping districts and mountain hot springs.

My 24th-floor “Wonderful” room took full advantage of Taipei’s urban landscape: floor-to-ceiling windows looked over the city and mountains beyond, though there was no view of Taipei 101 (those rooms cost more). The décor could be described as luxury Ikea: white lacquer, burnished wood, floral carpeting and whimsical elements, like three tubular tables topped by faux tree rings, by a comfortable chaise. The king bed was deliciously plush and faced a 42-inch plasma TV set over a long desk. Wi-Fi was 400 Taiwanese dollars for 24 hours ($14 at 30 Taiwanese dollars to the dollar), but access is limited to three devices, and a glitch required the concierge to reset it. The minibar included a carnival-size lollipop, a CD of chill-out remixes, Champagne flutes and a package of sexy pantyhose with the exhortation “be bad.”

The marble floor in the entryway continued into the open bathroom (which can be closed off by sliding doors). A cramped cell enclosed the toilet, but its futuristic features will distract you from your claustrophobia: the lid opened automatically and a wall panel at seat level was full of buttons — labeled “cleanser,” “soft pressure,” “pulse” — that controlled the ablutions (as in a bidet). The rainfall shower and tub were separated from the sink area by a tinted-glass half-door. Bliss toiletries were in the shower and on the sink, though the shelf left little room for dopp kits.

The front entrance, with its throbbing electronic soundtrack, seems like a party in full swing, but most of the action, including check-in, happens in the 10th floor lobby. There, guests gather by the front desk with their luggage or relax in a lounge filled with trampoline-size banquettes and lipstick-red leather couches, where you can snack on sugary confections by day and sip cocktails by night, when it turns into a packed club. A stunning 82-foot heated pool has an outdoor wet bar. There are two restaurants, the Kitchen Table, which serves a range of cuisines and a mediocre breakfast buffet, and Yen, a high-end Chinese restaurant.

After a night on the town, I returned to my room at 3 a.m. famished, so I ordered room service, which is available 24 hours a day (except the breakfast menu). My cheeseburger and a pastrami Reuben sandwich, which came with fries and a light salad, arrived in 30 minutes and really hit the spot.

Smack in the heart of a city that can be discombobulating for foreigners, the W Taipei provides familiar, luxurious comfort in flawless English. Strenuously hip if mildly pretentious, it strives to make you feel part of the in-crowd, but it doesn’t come cheap.