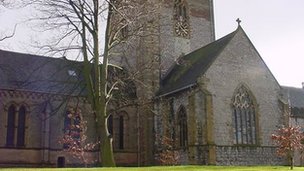 Chelmsford, Perth and St Asaph are to gain 'city status' to mark this year's Diamond Jubilee.

The towns beat off competition from 22 others across the UK to win the "civic honours" accolade.

The awards were granted by The Queen under the royal prerogative, following advice from ministers.

Events to mark The Queen's 60 years on the throne began last month and come to a head with four days of celebration in the first weekend of June.

The grant of city status is purely honorific and confers no additional powers, functions or funding.

Local authorities were invited last year to submit bids for their towns to take on city status in a process overseen by the deputy prime minister's office.

The winners are Chelmsford in Essex, Perth in Perthshire and St Asaph in Denbighshire.

Only one title was expected to be awarded but the government said the awards to towns in England, Scotland and Wales were made "in recognition of the significance of every part of the UK" in Jubilee year, as well as the "high quality" of the bids submitted.

Chelmsford, home to Essex County cricket team and Anglia Ruskin University, is one of the fast-growing towns in the south-east of England.

The leader of Chelmsford Council, Roy Whitehead, said he was delighted with the announcement, which he called a "tremendous honour".

Perth, on the banks of the River Tay, is the largest town in Scotland and its residents include Harry Potter author JK Rowling. It will become Scotland's seventh city.

Pete Wishart, the SNP MP for Perth and North Perthshire, said the award was "fantastic news".

St Asaph, which has a population of about 3,500, will become one of the smallest cities in the UK.

It is one of the few towns in the UK with a cathedral never to have had city status and it also played an important role in the history of the Welsh language. The priest who translated the bible into Welsh, William Morgan, later became the bishop of St Asaph.

In recent times, it is more popularly known as the birthplace of Liverpool striker Ian Rush.

The current Bishop of St Asaph, Rt Rev Dr Gregory Cameron, said he was pleased "these decisions are made not on the size of the population but on the quality of community life".

St Asaph was chosen ahead of Wrexham, a much larger town in north Wales.

Deputy Prime Minister Nick Clegg said the three towns had won out from an "exceptional" field of entrants.

"I have been moved by the pride and passion which people have shown in putting their nominations forward," he said.

"The standard of application was very high and those who missed out should not be downhearted. I hope the competition has given the residents of all the places which applied a sense of civic pride, of collective ownership and community spirit."

There are currently 66 cities in the UK. City status is rarely granted, with only 14 new cities created during the 20th century.

In the last contest - held in 2002 for the Queen's Golden Jubilee - Preston, Newry, Lisburn and Newport were among the winners. In 2000, Brighton and Hove, Inverness and Wolverhampton were given the status to mark the new millennium.

The government also announced on Wednesday that the right to use the title of Lord Mayor will be bestowed on the city of Armagh in Northern Ireland. It was chosen ahead of 11 other cities.

What Price is This Place?

Where the living is easier

A new index ranks the competitiveness of global cities

THE Economist Intelligence Unit, a sister company of The Economist, has devised a new index which ranks the competitiveness of the most prominent cities across the globe using a number of economic, demographic and social variables. The 120 cities in the index are home to some 750m people and $20.2 trillion worth of GDP, 29% of the world's total. High concentrations of skilled residents, infrastructure and institutions mean that the top of the index is dominated by America and western Europe, with 24 cities in the top 30. Comparing the index to the EIU's cost of living data (a measure of western-style living expenses), identifies those cities which also represent good value for money for the ambitious expatriate. 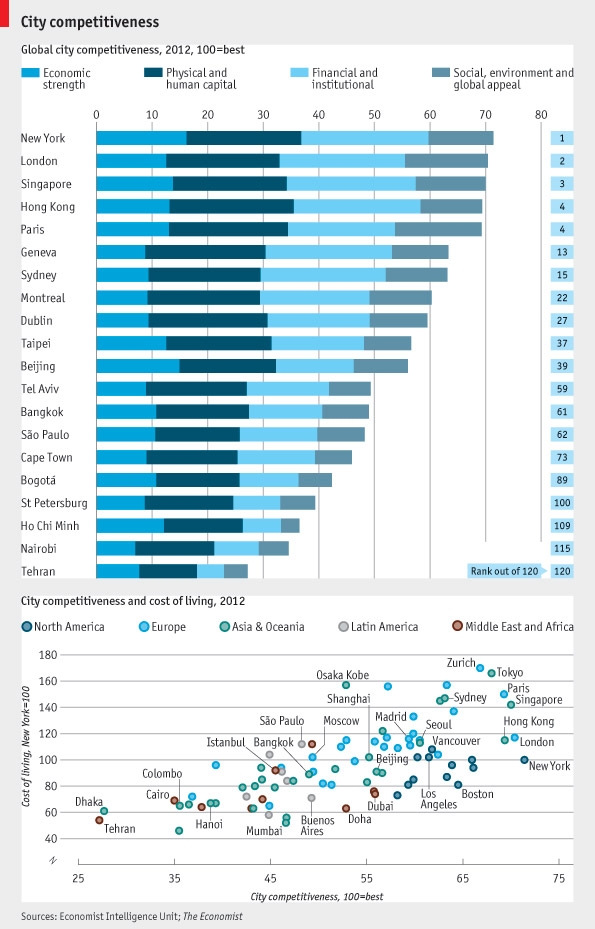 A tale of two mountains

在中国拥抱绿色
A tale of two mountains