Is This the World Quirkiest Capital？

A Building Boom in Boston

https://en.wikipedia.org/wiki/Ural_Mountains
The Ural Mountains or simply the Urals, are a mountain range that runs approximately from north to south through western Russia, from the coast of the Arctic ...

Seasoning the Seasons 〜 Kanazawa: An Eternal Love of Beauty and Culture 〜
October 12 Mon. 8:30 / 14:30 / 21:30 (JST)
October 13 Tues. 2:30http://www3.nhk.or.jp/nhkworld/en/tv/seasoning/201510050600/
Kanazawa is in Ishikawa Prefecture, facing the Sea of Japan in the north. Here, far from Kyoto and Tokyo, a great city was built in the age of the samurai, boasting 300 years of history. The first lord of this vast land, Maeda Toshiie, spared no effort in promoting culture such as crafts and the performing arts. This policy was carried on by his successors, and a small farming town transformed into a flourishing city of culture. An obsession with beauty has always thrived here. Hospitality that gratifies all the senses awaits you.
調味季節 〜 金澤: 美麗永恆的愛和文化 〜 10 月 12 日週一 8:30 / 14:30 / 21:30 (JST) 10 月 13 日星期二 2:30HTTP://www3.nhk.or.jp/nhkworld/en/tv/seasoning/201510050600/金澤是在石川縣，面臨日本海北部。在這裡，遠離京都和東京，一個偉大的城市始建于時代的武士，擁有 300 多年的歷史。第一主的這片廣闊的土地，豐臣秀，不遺餘力地在促進文化工藝品和表演藝術等。這項政策被由他的繼任者和農場小鎮，變成了一個欣欣向榮的城市的文化。癡迷于美麗總是在這裡繁榮發展。滿足所有的感官的好客等待著你。
翻譯由 Bing 提供 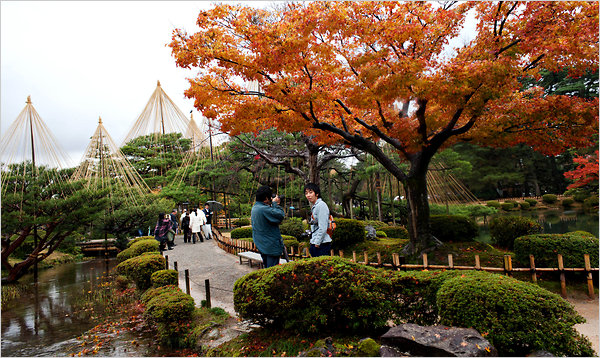 Ko Sasaki for The New York Times
Canopies of rope protect trees from heavy snowfall in Kenrokuen Garden, the principal attraction in Kanazawa, a history-rich city in the Ishikawa Prefecture on Japan’s western coast.

ON a sunny early November afternoon in the Japanese city of Kanazawa, the alchemy of autumn had already begun transforming the city’s beloved Kenrokuen Garden from an oasis of leafy greens into a gold-tinged sanctuary. Workers were busy constructing yukitsuri — thick ropes tied to fragile tree branches, intended to brace them against heavy snowfalls — in dramatic pyramids that soar over the gnarled wood. And the transformation continues as the seasons progress.

Go to the Kanazawa Travel Guide »

https://en.wikipedia.org/wiki/Alicante
Alicante or Alacant both the Valencian and Spanish being official names, is a city and port in Spain on the Costa Blanca, the capital of the province of Alicante ...