The Ghosts of Amsterdam

The Ghosts of Amsterdam 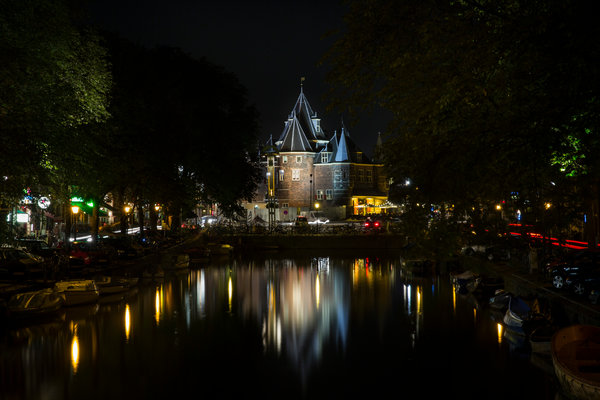 Ilvy Njiokiktjien for The New York Times
The Weigh House has served many functions through the centuries, including as a medical theater.

It only recently occurred to me that one very fine if not exactly intentional purpose for historic preservation is to keep dead people alive. Having spent the past several years living in Amsterdam and researching a book about its history, I now find that virtually anywhere I walk in this city, whose center has been so tenderly and smartly maintained, I am jostled by ghosts. 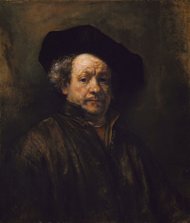 A self portrait by Rembrandt van Rijn.
Enlarge This Image 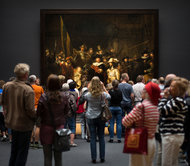 Visitors at the Rijksmuseum in Amsterdam stand in front of "The Night Watch" by Rembrandt.
Enlarge This Image 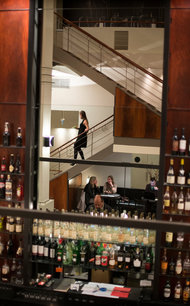 De Jaren, a cafe, is on the site of a house where Rembrandt once lived.
Enlarge This Image 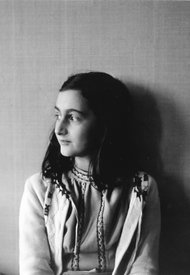 Anne Frank in 1941.
Enlarge This Image

People wait in line at the Anne Frank House.


Russell Shorto is the author of “Amsterdam: A History of the World’s Most Liberal City,” to be published next month by Doubleday. 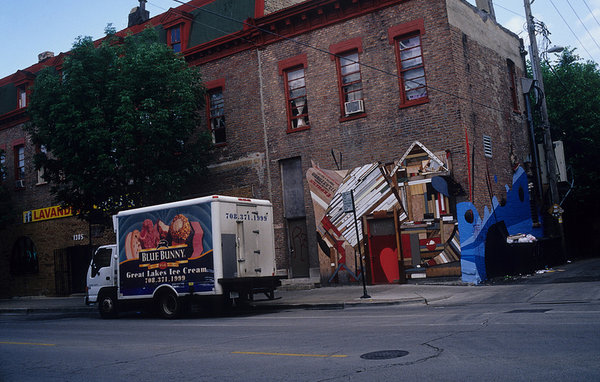 ‎Global — These are the five cities that have made our pinboard and deserve our mention even if they did not appear in our Quality of Life index. Whether it be for the transformation they have seen over recent years, the warm and friendly residents or the local cuisine, these places win in the simple...‎
張貼者： hanching chung 於 下午7:58 沒有留言:

The innovation of the green cab fleet was meant to help solve the problem of an unequal distribution of taxis in the city.


After decades of contention between residents and politicians, the Bloomberg administration will announce on Wednesday plans of constructing a six-acre complex by SHoP and Beyer Blinder Belle Architects over a ten year period. Nine vacant lots in New York City’s Lower East Side will be erected into a mega-development of retail, office, entertainment, cultural and housing units. The complex will be located in rapidly gentrifying neighborhood, once home to working-class Italians, Jews, Puerto Ricans and Ukrainians, and has struggled to preserve affordable housing against an encroaching luxury market. In response, developers have collaborated with local community groups agreeing that half of the projected 1,000 apartments will be for low-, moderate-, and middle-income families.
However, is this enough to sustain a balance of varying incomes?

Some question whether the project will be realized at all. Coming in at the final months of Mayor Bloomberg’s term, critics predict the plan could be overturned by his successor. Nonetheless, it seems everyone has come to a consensus; Something must be done about the empty lots and tension between the diverse communities in the area. Edward Delgado, a New York resident whose family was evicted from the area over forty years ago, has hope.
“I know it’ll never go back to the way it was,” he said. “But I want the right for poor people to live here, too.”
Read the full New York Times article to find out how developers plan to address the upcoming development. Make sure to let us know what you think in the comment section below. KAOHSIUNG, Taiwan — The problem with bananas, for the Taiwanese farmers who grow them, is that they are not pineapples.
Taiwan’s banana exports have fallen sharply, and prices the farmers get have fallen, too. The solution would seem simple: better marketing, as has been done for almonds, raisins or pomegranates in the United States.

The Taiwan Banana Research Institute wants to make the banana a luxury product. It hopes consumers will consider the Pei-Chiao bananas, the Cavendish variety most often grown in Taiwan, a delicacy for which they will pay a premium price. “Our goal is to position Taiwanese bananas as a brand and appeal to consumers who are willing to pay extra for fruit because it tastes better and was grown using safer farming methods,” said Chao Chih-ping, director of the institute.
But so far, the country’s efforts have fallen short.
Taiwan’s banana industry needs to discover a hit product that will increase demand and raise prices. Banana farmers look to the example of the pineapple cake, the snack savior of Taiwan’s pineapple industry.
In 2006, the Taipei city government began promoting the pastry as a souvenir of Taiwan, holding annual baking competitions and marketing it to tourists. That year, total revenue earned by Taiwan’s pineapple cake industry was 2 billion Taiwan dollars, about $67 million, according to the Taipei Bakery Association.
By 2012 revenue had grown to 39 billion Taiwan dollars, driven by bakeries like SunnyHills, which ships pineapple cakes to buyers in mainland China, Hong Kong, Japan and Singapore.
“We hoped that banana cake could be the next pineapple cake, but that hasn’t happened,” said Chuang Lao-da, a director at the Council of Agriculture’s Agriculture and Food Agency.
Taiwan’s surplus bananas have also been turned into chips, puddings and a domestically consumed liquor.
But so far, no hit. Wu Pao-chun, a baker famous for winning international competitions like France’s Coupe Louis Lesaffre, created his own version of banana bread as a tribute to farmers.
Unlike the hearty American version, which is made with mashed bananas, Mr. Wu’s recipe features slices of fruit. Though many of Mr. Wu’s baked goods are sold online, his banana bread cannot be shipped because the fruit will lose its texture and flavor. It is available only at his Kaohsiung bakery, where about 30 small loaves are baked each day and sold for 80 Taiwan dollars, about $2.70 each.
“People in Asian countries aren’t used to baked goods made with bananas. They have to become accustomed to the flavor, which we hope to do by gradually promoting our banana bread,” he said.
Mr. Chao thinks researchers could extract tryptophan, an amino acid, from surplus bananas for use as an antidepressant. Peels may be a source of antioxidants and fiber can be harvested from stems and turned into textiles.
The American corn industry may be a better model for Taiwan’s banana farmers than pineapple cakes.
Most corn is turned into ethanol, animal feed or high-fructose corn syrup, but it can also be used in the manufacturing of cosmetics, pharmaceuticals and textiles.
“We’re looking at products like nutritional powder made from processed bananas, which is becoming more popular in Japan as a health and weight-loss aid,” said Mr. Chuang, the government agriculture official.
Lu Ming, a farmer, has given up waiting for the banana’s ascendence. In 1967, Mr. Lu decided to switch from farming rice to bananas. For two decades Mr. Lu, 76, cultivated his banana trees in the Qishan district, rising at 5 a.m. and working until sunset. He earned enough money to hire workers who helped harvest the fruit and package it for shipment.
Farmers could not compete with lower labor costs in the Philippines, however, and exports of Taiwan bananas began to plunge. According to the Council of Agriculture in Taiwan, banana exports to Japan, a major market, plummeted to 9,161 tons in 2012 from 42,600 tons in 1967.
By the early 1980s, Mr. Lu could no longer afford laborers, and he and his wife began selling candy from sidewalk stalls to make ends meet. Now Mr. Lu, who still farms and works odd jobs, says there are years when his banana harvest earns less than 100,000 Taiwan dollars — far below the average annual income in Taiwan of 452,400 Taiwan dollars, about $15,200.
Businesses have sprung up around the memories of the boom times. Once a warehouse for bananas before they were loaded onto ships destined for Japan, the Banana Pier in Kaohsiung is now a seaside entertainment complex. Banana New Paradise in Taichung appeals to nostalgic diners by combining a restaurant with an indoor re-creation of a 1960s Taiwan village.
The Qishan-based rock group Youthbanana organizes tours and working holidays at nearby farms, including the fields belonging to Mr. Lu.
He says he never wanted to stop cultivating bananas, even as it became less profitable.
“When I was younger, we’d roast bananas like yams, feed the peels to pigs and use the leaves to steam buns or fold them into toy boats for our children,” he said. “It wasn’t just about growing and selling. It’s a culture that I want to survive.” 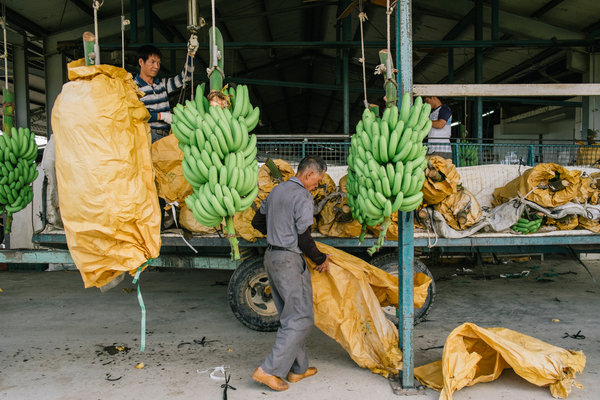 Play Video
In an age of multiplexes and 3D projection, there’s a cinema in Taiwan that’s helping to keep old fashioned movie-going alive. The Chuan Mei picture house has a particularly unusual feature - film posters, all painted by hand.
In an era where 3D is giving way to the brand new 7D cinema experience. And where even the display of film posters is going digital.
全美戲院The Chuan Mei theatre in Tainan city in southern Taiwan is certainly a rarity where not much has changed in the last 5 decades.
Prepare yourself for a feast of a once popular art form - hand-painted posters.
Tom Cruise and Robert Downey Junior are among those created by hand - as if the digital era never arrived.
Oil painter Yan Jhen-Fa said, "The movie poster we make is very big, unlike making a smaller sketch. With a smaller sketch, you can control the scale of the picture easily. But for the large movie posters it is hard to scale the size correctly."
Yan, who has been creating oil paintings for almost half a century, says he used to paint for several cinemas in the city but now it’s only Chuan Mei which sticks to the original style.
Wu Jun-Cheng, owner of Chuan Mei Theater, said, "Of course, we can print a poster digitally through a computer. But when you look at the price, it is not that cheap. And we thought the oil paint could also give our theatre a certain atmosphere. So when we consider everything, we still prefer the oil paints."
And it’s not just the oil paints.. Chuan Mei is going retro all the way.
Instead of computer-generated tickets, customers get the real thing with stamping.
The only compromise is a computerised cinema projector...as movies are no longer distributed on film.
Cinema-goer Carey Chen said, "I like bringing my children here, so they can experience what the movie theatre in the old days was like. Of course, there are other movie theatres with better interior designs but the tickets are more expensive and there is no sentimental feeling about it."
And the feeling doesn’t stop at the cinema experience.
Yan’s hand-painted posters have also been encouraging people to pick up a paint brush.
Though he doubts that anyone would want to take up his work when he retires.
He just wants to spread his love of painting to as many people as possible.

London is turning inside out.